Description of Talking ParrotVideos will be updated frequently and shown in the order of update, so that you will be see 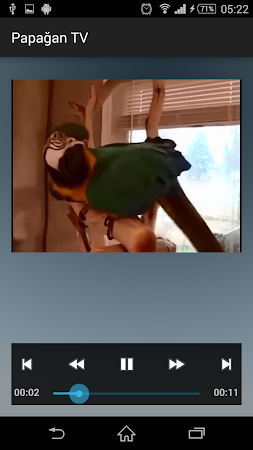 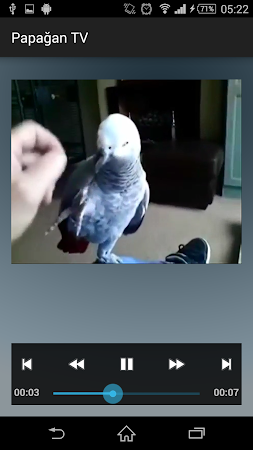 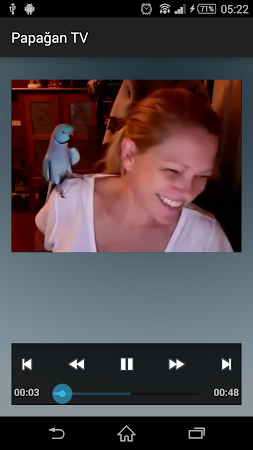 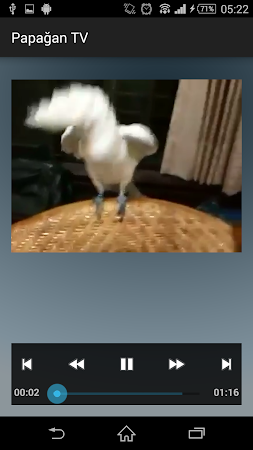 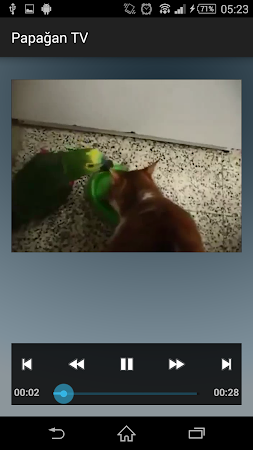 Videos will be updated frequently and shown in the order of update, so that you will be seeing newest videos when you open the application.
I will be adding the funniest and cutest parrot videos which will be the funniest animal videos you will see!
Great application for your kids.
Both entertaining and good for amusement
Run the app and lean back, videos will be shown automatically as they come to end, you dont have to click next.
We gathered the best parrot sounds for you.
More than 15 parrot sound.

Talking birds are birds that can mimic the spoken language of humans.
Many species of the genus Amazon Parrot are strong talkers.
The African grey parrots are particularly noted for their advanced cognitive abilities
and their ability to talk.
There are two domesticated species of which the Timneh African grey tends to learn to speak
at a younger age than the Congo African grey.
Pet Congo African greys may learn to speak within their first year,
but many do not say their first word until 12–18 months old.
Timnehs are generally observed to start speaking earlier, some in their late first year.
Cockatoos, Australian galahs can talk, although not as well as some other parrots.
Male galahs are reportedly easier to teach than females.
The yellow-crested cockatoo is rated as a fair-to-good talker.
The long-billed corella is described as being able to talk very clearly.
Parakeets, The budgerigar, or common parakeet, are popular talking-bird species because of
their potential for large vocabularies, ease of care and well-socialized demeanor.
The monk parakeet, sometimes known as the quaker parakeet, is also a skilled talker.
The rose-ringed parakeet, also known as the ring-necked or Indian ring-neck parakeet, is an accomplished talker and popular pet which can develop a large vocabulary and talk clearly in sentences.
The blossom-headed parakeet is rare and therefore not often kept as a pet, however, they are good talkers.
The African ring-neck parakeet can also talk, but only if trained at an early age.
The Derbyan parakeet an excellent talker. The clarity of their speech has been compared to that of amazon parrots although they may not learn extensive vocabularies.
The slaty-headed parakeet generally does not learn to talk.
The Australian king parrot can be trained to talk if it is hand-reared.
One hand-raised Australian magpie developed the ability to mimic human speech,
including words and phrases. This individual mimicked a large number of (non-human) sounds,
but a third of all mimicked sounds were of human speech.The author stated that mimicry by the magpie was far more accurate than that of the lyrebird.
Mimicking human speech is not limited to captive birds. Wild Australian magpies, lyrebirds and bowerbirds that interact with humans but remain free, can still mimic human speech.
Also please look at other apps like talking pierre, we recommend it.
Clicker train your parrot. Parrots are very trainable, respond well to clicker training, and will appreciate the mental stimulus. Mental activity will help decreasing squawking significantly. Clicker training a parrot not to squawk is parallel to clicker training a dog not to bark. Get a clicker and small, ingestible parrot treats.
First associate the clicker and treat with one another. In front of your pet, click the clicker and “immediately” give the treat afterwards. Do this until your parrot starts watching expectantly for a treat after the clicker–this is a sign that they have successfully associated the two together.
Use the clicker as you would a treat. The clicker replaces the need of providing a treat, which can be expensive over time, messy, and difficult if your bird is a picky eater.

Parrots are smart birds that speak english very well, they are best friends for kids. Which animal can play and speak as well as them else?
Our number one parrot’s name is angela, we are talking with angela.

This article comes from the Internet and does not representvidosPosition, please indicate the source for reprinting：https://www.salssa.com/7912/talking-parrot-2-2-apk-free-media-video-application-apk4now/
3like
Label:Application